Developing games to support our mission of bringing the benefits of game based learning to the classroom is often a challenge.  What should be the next game we create?  How do we balance education with fun? How do we help teachers get the professional development they need to use games in the classroom effectively?  The encouragement we get from our users, reviewers and testers give us constant reasons to face these challenges, but it is the personal success stories that remind us why we do what we do.

This article is about Lisa Lewis, an education consultant that only recently decided to explore game-based learning.  She chose our top selling game, Mayan Mysteries™, to use with one of her students.  Mayan Mysteries has been recognized by reviewers as a best-in-class educational product, including a run as the #1 featured product for ages 9-11 on the Apple App store.  Here, Lisa shares how the experience of using Mayan Mysteries was not only eye opening for her, but also such a rewarding way of learning for her student.  If you ever thought the value of game-based learning in the classroom was a myth; this story might make you realize it is time to explore.

A student I tutor, who is currently a 5th grader reading on a 3rd grade reading level, and is riddled with all types of learning challenges, showed me a thing or two the other day.  I thought I would try something different with him and I introduced him to Mayan Mysteries on my laptop.  Thinking to myself, there is no way that this student will be able to read, let alone comprehend the detailed information, I was hesitant to give it a try.  But I also thought how would I know if I didn’t give it a try.  The main question in my head was “How is he going to be able to maneuver his way through unfamiliar territory?”  I certainly was not going to be any help, because this was so far from my own comfort zone.

As the student logged into Mayan Mysteries, I could tell he was intrigued by the graphics.  His face lit up, as it has never done with me before.  He is so accustomed to our structured lessons each week.  We practice old and new vocabulary words, we read a text together and talk about it, and then we write using a prompt and a graphic organizer.  I didn’t scaffold anything for the student about Mayan Mysteries.  I merely said, “see what you can do”.

As he entered the Mayan civilization, he clicked through a few things to get to the actual listening and game part.  He listened intently to the voice as it read the very complicated text to him.  He watched with bated breath and totally disregarded anything I said to him.  I was merely giving him encouraging thoughts as he continued to listen.  Once the reading section was completed, the student proceeded to click on things and move them around on the screen according to the directions he was given.  Once he had everything in the places he believed they should be, he clicked something and the words “You Were Successful” came up on the screen. 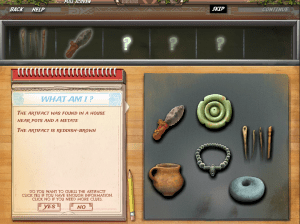 He continued on for another two parts of the game and was once again successful with both parts.  I stopped him for a moment to say congratulations.  I also asked him how he knew what to do.  He couldn’t really tell me how he knew what to do.  I was assuming it was merely instinctive for him to know what to do.  I told him I was proud of him for maneuvering his way through the three parts that he had gone through.  I told him I knew it wasn’t easy, but that he did a great job. 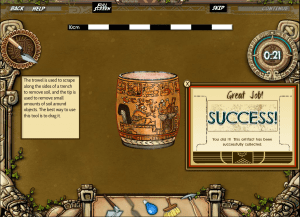 I asked him what he thought of the game.  He said it was different than most of the games he had played.  I also asked him if he learned anything.  He said yes, but had a difficult time elaborating about what he had learned.  This is pretty typical of this student.  He usually gives one or two word answers and has a very slow processing time, as well as a severe memory issue.  He cannot recall for me what he has done earlier in the day at school, unless it is related to his Chrome book or what he has done during recess.

I consider this to be a big Aha moment for me and for the student.  He realized that he could accomplish something new and different.   He also realized that video games could be both educational and fun.   I learned that after all these years working in large groups, small groups and individually with children, that kids can still blow me away with what they can do when it comes to technology.  Just another teachable moment for me! Remember Who Wants to Be a Millionaire? How about Who Wants to be a Mathematician? The competition, in which students compete for scholarship money, is just one of the events kicking off this April for Mathematics Awareness Month.

In 1986, President Ronald Reagan inaugurated Mathematics Awareness Week to encourage a greater appreciation and understanding of math. “It is appropriate,” he stated in his opening declaration, “that all Americans be reminded of the importance of this basic branch of science to our daily lives.” 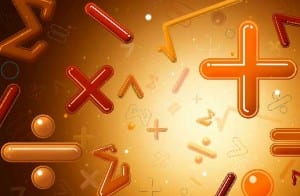 Over time, the tribute  shifted from centralized national events to local, state, and regional activities. In 1999, the week-long event became Mathematics Awareness Month. The number and quality of events grow by the year, and with the increased focus on STEM education, Math Awareness Month is more significant than ever.

At Dig-It, we enthusiastically support Mathematics Awareness Month’s goal to grow an appreciation of math as a field of study, and to promote math as intriguing, exciting, and fun. If you think math is boring, baffling, or intimidating, you are exactly the kind of person Mathematics Awareness Month wants to reach. Instead of something daunting, we want math to be seen as something accessible—an irreplaceable part of people’s everyday lives and careers.

This year’s theme is “The Future of Prediction,” exploring how data and statistics help with everyday complex systems like the Internet and power grids and how data can drive innovation and insight into the future.

Mathematics Awareness Month is celebrated all over the country, but here are some events local to Dig-It’s studio for you to explore.

You can keep up with what’s happening on the Mathematics Awareness Month Facebook page, follow along on Twitter, and check with local school systems and universities to celebrate math close to home.  We will be featuring our math games from game developers throughout the month.

“What did a Mayan kid my age wear every day?”

“How does math work without the number system I’m used to?”

“How different would my life have been if I was a settler in early America?”

“Wouldn’t it be cool to have a model of a real archaeological artifact?”

“Are there active archaeological dig sites in my state?”

April is the perfect time to ask all of these questions—and get answers! It’s Archaeology Month in Dig-It’s home state of Maryland, and we’re getting ready for a statewide celebration of our rich archeological heritage. There are plenty of opportunities for the public to take part in hands-on, educational, and—most importantly—fun events to learn more about archaeology as a whole, and what it means to our state.

From the first settlement in Maryland at St. Mary’s City to Civil War sites like Lafayette Square in Baltimore City, to the Chesapeake Bay region’s earliest Native American human settlements, our state has a rich tradition of history to celebrate. 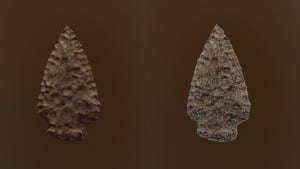 So why is archeology so appealing? And what makes it such a powerful teaching tool? The Society for American Archeology (SAA) says on their website that “it captures our imagination, encourages our curiosity, and stimulates our sense of wonder. It is a great teaching tool that excites and motivates students, and it’s fun!” It’s tempting to think archeology belongs only in history class, but in reality it enriches all areas of study—language arts, social studies, science, even math! And it’s rewarding to more than just students. Maryland’s archaeology month has something for all ages, from academic lectures to family fun days.

Here are a few ideas for how to celebrate Archaeology Month in Maryland.

• Discovering Archaeology Day at the Jefferson Patterson Park & Museum invites families to spend the day on April 16 exploring on-site exhibits, learning from experts, and identify personal artifacts.
• Historic St. Mary’s City hosts a Maryland Archaeology Month Lecture, “A Brief History of Historical Archaeology in Maryland’s First Capital,” on April 21.
• Create your own event! Find and visit archaeological sites and programs all over the state through resources like The Council for Maryland Archeology and The Archaeological Society of Maryland.
• Visit Josiah Henson Park in Bethesda, Maryland featured by our friends at Archaeology in the Community and learn more about their local efforts.
• Venture out of Maryland and into the ancient world of the Romans and the Mayans with Dig-It’s archaeology games.
• Not from Maryland? Visit the Society for American Archaeology to find out when archaeology month happens in your state.

Dig-It is celebrating by traveling to this year’s annual SAA conference in Orlando, where we will be unveiling a new early-American archeology game. We can’t wait to spend time with the archeology community, advancing our knowledge and sharing our work. Until then, you can get a sneak peak in our video trailer below. 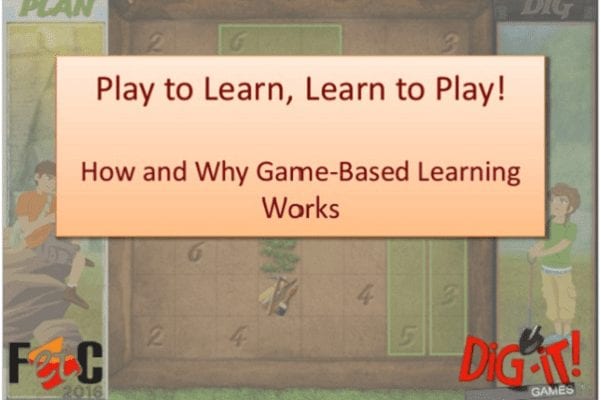 We were happy to have our CEO, Suzi Wilczynski present to over 175 educators at the FETC 2016 Game Based Learning Workshop this year. For those who could not attend, here is a summary set of slides here to share with you. By reading through these, you should gain a basic understanding of game based learning and its benefits.

Should you have any questions about Game Based Learning, please feel free to reach out to us. We love hearing from interested parties and answering questions about how games can be used in education.

If you want to know more about our products, check out our social studies series Excavate! where students are put in the shoes of archaeologists or our STEM games ExoTrex and ExoTrex 2 where students must investigate other planets with the goal of finding a new home for humanity. Our full game library can be viewed on our Games page.

If you want to know more about the Future of Education Technology conference, check out their website to learn about their history, goals, and more. Thanks to everyone who came to see Suzi speak this year! We had a great time at FETC.