You’ve probably heard the acronym STEM used more and more lately in relation to education. You probably also know that it stands for Science, Technology, Engineering, and Math. But what do those subject areas really mean for education? Why are they important? How do they help kids learn and grow, in and out of the classroom?

A few years ago, Education Week published an article online stating that “STEM is more than just a grouping of subject areas. It is a movement to develop the deep mathematical and scientific underpinnings students need to be competitive in the 21st-century workforce.” That’s also what President Obama said in 2010 when he set a clear goal for STEM education: motivate and inspire American students to excel in STEM subjects so that within the next decade, they will no longer be in the middle of the pack for STEM achievement but leaders of a competitive global community.

“This movement goes far beyond preparing students for specific jobs,” the Education Week article goes on to say. “STEM develops a set of thinking, reasoning, teamwork, investigative, and creative skills that students can use in all areas of their lives.”

A school STEM Night is a great way to include families, educators, and the community in supporting students’ ability to do just that. On Tuesday, March 22nd, Bethesda Elementary students in grades K-5 get a chance to display their STEM projects at the annual STEM Night celebration. With the help of teachers and parents, students chose topics they were interested in learning more about. They applied the scientific method to a hands-on investigation that produced results. They worked individually and in teams to build creative displays that will communicate their discoveries to the STEM night audience.

STEM education is close to our hearts at Dig-It Games. We’re a company that uses technology to produce video games that teach and support these vital subjects. We are deeply invested in the national dialog on STEM, and we believe in the power of game-based learning to promote STEM education in schools and new and fun ways. 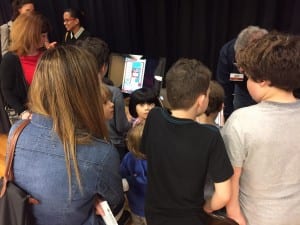 We loved being a part of Bethesda Elementary’s STEM night last year. Dig-It staff members Dayle and Steve ran our exhibit table as well as checking out and admiring students’ STEM-related projects and getting a chance to interact with parents, educators, and especially kids. Their favorite part of the night was seeing how excited students were to play, and meeting parents who were just as excited as the kids! Some kids ditched their parents for the games right away, some kids didn’t want to let go of the games, and some kids competed with their parents! In fact, there was so much interest that we ran out of devices for visitors to play on.

This year, we’re honored to be invited back again, along with C3 Cyber Club, KID Museum, Under the Sea‘s mobile aquarium, and Montgomery County Public Library. We’re bringing more devices and more DIG folks. We will also be exhibiting some of our unreleased titles before they are seen by the general public. Students can comment and give feedback on a game-in-progress, which is known in the industry as beta testing, an essential part of product development. This little bit of behind-the-scenes insight fits right in with the STEM movement’s goal of motivating kids to pursue intellectual curiosity, and equipping them for hands-on, innovative problem-solving.

“We love events like this where we interact with our end users,” says Dig-It Games president Suzi Wilczynski. “Being around students, parents, and teachers helps us to make sure that our games are meeting the needs of those whose opinions we trust and follow. It also supports our belief that game-based learning enriches education by encouraging critical thinking, independent learning, and the joy of intellectual discovery. Bethesda Elementary’s STEM Night is an event we look forward to attending.”

“We’re thrilled that Dig-It Games has again partnered with us,” says Kenneth Tercyak, a co-organizer of the event. “Bethesda Elementary students enjoy learning about computer science and its application to game design. It’s a great way to help build their interest in STEM and STEM careers.”