Expanding our usability, Dig-iT! Games is thrilled to announce Excavate! Egypt is now available in Dutch! We’re beyond excited to be able to spread our love of archaeology, Ancient Egypt and gaming with more players and students. As we launch our newest version of the game worldwide we want to introduce you to our brilliant translator, Tine Rassalle. As the recent pandemic changed education early this year, Dig-iT! Games asked for crowdsource volunteers to translate the game into other languages so students, teachers and parent would have another resource available. Thankfully. Tine responded and delivered a new Dutch translation so we asked her to answer a few questions about her background, gaming and how she got into the field of Archaeology.

Tell Us a Little About Yourself

I am a PhD candidate at the university of North Carolina at Chapel Hill in the US. I grew up in a small village close to Ypres, in Flanders, the Dutch-speaking part of Belgium. I have been in the US for six years now, and I am currently writing my dissertation on coin hoards that have been found in ancient synagogues in Israel. I also teach classes at UNC, mainly on the history and archaeology of ancient Judaism and early Christianity. I am also involved with ASOR (the international organization for archaeologists, historians, and linguists of the ancient Near East), and SASA (Save the Ancient Studies in America), a digital initiative that unites Ancient Studies graduate students and early career academics to help create interest in Ancient Studies, particularly for high school and college students.

Why did you choose to become an Archaeologist?

I think I was about six years old when I told my mother I wanted to be an archaeologist. I remember seeing a book with pictures of pyramids and Aztec temples and I asked my mom what they were and how you could get a job studying these mysterious buildings. I think I saw archaeology as solving a puzzle: you don’t know anything about a certain building you discover, but based on the artifacts that you find in it, maybe you can try to figure out its purpose.

When I went to college, I immediately enrolled in the department of Archaeology at Ghent University (we do not have majors and gen-eds in Belgium; you just choose a field and every class you take is within that field). At first, I thought I would specialize in Archaeology of South-America, but it turned out that this is not being taught at Flemish universities. So, I switched areas and specialized in Archaeology of the Ancient Near East instead. I have always been fascinated with cultures that we know very little about, so studying ancient Mesopotamia and Assyria was very exciting to me. I studied archaeology because I wanted to understand ancient cultures and people better: how did their lives look, what did they value in society, what religions did they have, how can we deduce information about their world from the objects that they left behind?

One day, a professor of mine lamented that our field has a severe lack of people knowing the ancient languages of Aramaic and Syriac. He told us that most people specializing in the ancient Near East end up studying cuneiform (like Akkadian or Sumerian) at some point, but almost nobody wanted to dive into the North-West Semitic languages. That is when I decided that I wanted to continue my education and learn these specific languages. So, after I graduated with my Masters in Ghent, I moved to the Netherlands and started a BA in Hebrew and Aramaic Languages and Cultures at Leiden University. There I met a professor, Jürgen Zangenberg, who was about to start a new excavation project in Israel, excavating a small, Roman-Byzantine village close to the Sea of Galilee. I told him I was interested in joining and that was the beginning of my journey into the history of ancient Judaism and early Christianity in the Syria-Palestine region.

To make a long story short, this interest led me to work at the National Museum of Antiquities in the Netherlands for a while and eventually to UNC to start my PhD in ancient Mediterranean Religions and Archaeology. 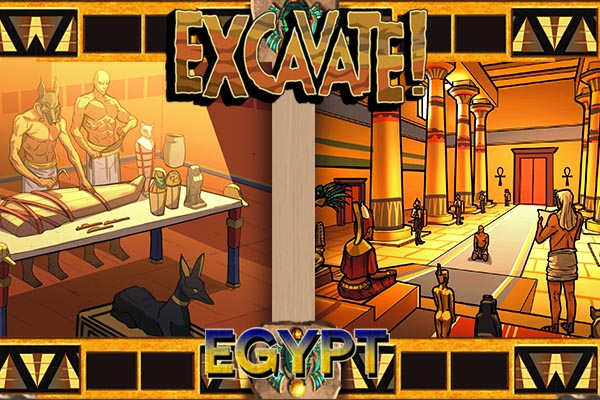 Where in the world have you excavated?

As part of our college degree in archaeology, we needed to participate in field-schools. My first excavations were in Belgium, where I dug a medieval monastery from the 13th century, and a World War I battle field with German and French/British trenches and soldiers. Very diverse!

When I was allowed to participate in excavations abroad, I dug at two Roman sites: one in Portugal and one in Corsica. It was only when I moved to Leiden University that I was able to go on my first Middle Eastern dig. My first excavation season with Jurgen Zangenberg was at a site called Horvat Kur (https://kinneret-excavations.org/tel-kinrot/horvat-kur); a Byzantine village with an ancient synagogue in the middle. I loved the place and its findings so much that I continued to go back almost every summer since 2009 and I am now the field supervisor for this project.

When I was working at the museum in Leiden, I also joined a project in Jordan for a couple of autumns and I traveled to Turkey once for an archaeological documentary. Lastly, I excavated with my current PhD advisor Jodi Magness at the site of Huqoq: another ancient village in Israel with a synagogue, known for its colorful mosaics (http://huqoq.web.unc.edu/) !

What is your most memorable find during a dig?

That is a hard question, but I think the most memorable object we ever found was a giant, decorated stone table with four legs, discovered at the synagogue of Horvat Kur. The object was made of basalt stone (and weights 350 kg or 770 pounds!) and has images carved in it on all four sides, depicting vessels, candlesticks, a ladle, and decorative elements. The stone was found plastered into the floor as a sort of bench to sit on, but we know that this was not its original place nor function as this way of placing it obscures the side images. We truly have no idea what this object is or what it could have been used for! As it is made out of stone we cannot date it either, so we have no idea how old it is. This is one of the only “stone tables” that have ever been found in this region and it is truly an enigma! 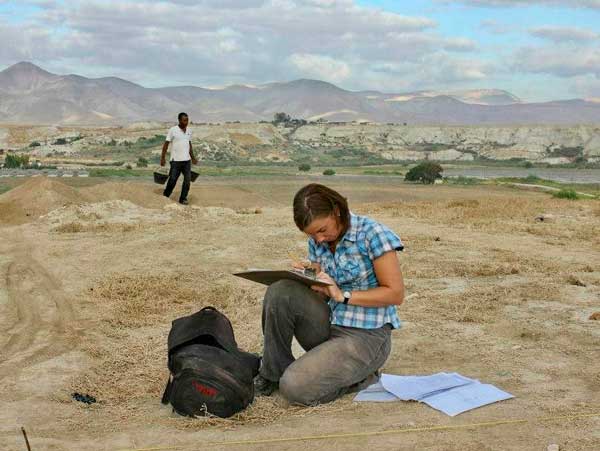 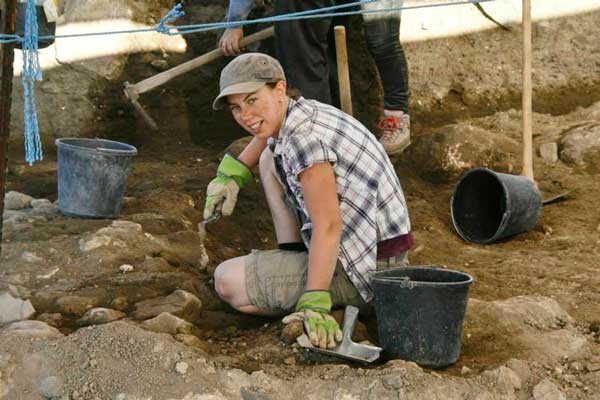 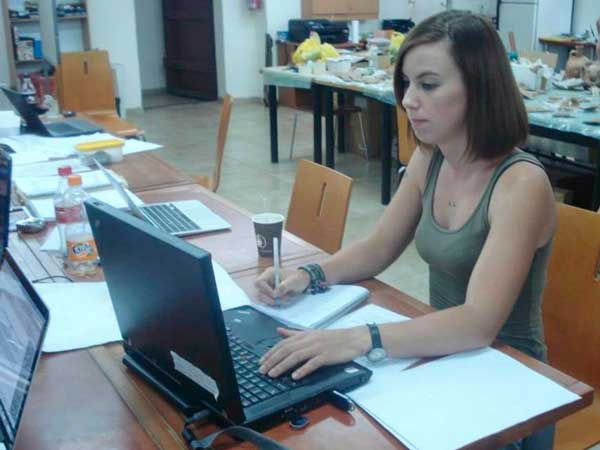 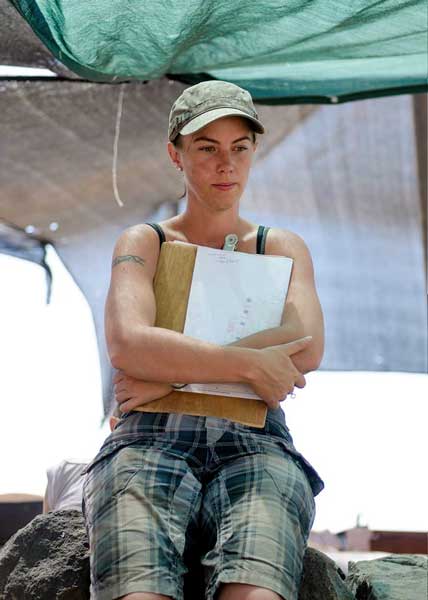 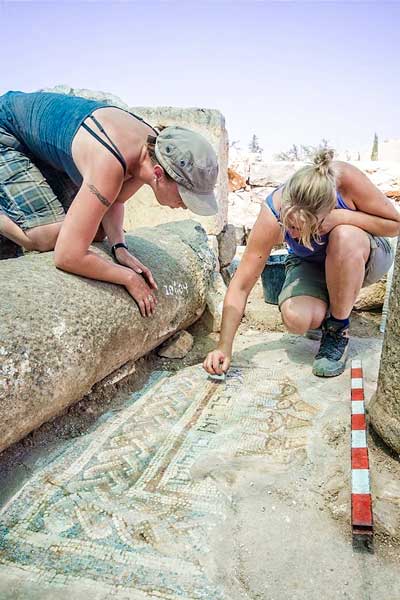 When did you get interested in Archaeology and Gaming?

My dad works in IT so we always had the latest pc’s and hardware at our house. I don’t even remember when I started playing video games but it must have been in kindergarten because I could not even read yet! So, I have always been a gamer: next to reading books, it was the perfect way to escape real life and go on adventures. I played pretty much everything I could get my hands on as a child and teenager, from Role Playing Games (RPG’s), to Strategy games, Survival-Horror, and Puzzle games.
Since college I have bought a new laptop every 3 years or so, just so I can play the latest games on that device. However, I always only saw gaming as a hobby, and moreover, one you should not brag about because “video games are not good for you”. It was only when I read the book “Archaeogaming: An Introduction to Archaeology in and of Video Games” by Andrew Reinhard about two years ago that I realized that video games could be a real academic topic within archaeology/history/art history. That’s when I started reading more about the field of archaeogaming and started learning about the possibilities of using video games as educational tools. A whole new world opened up to me! I discovered that I could combine my two biggest passions: archaeology and video games, and that video games could be used as a tool to communicate archaeological research to the public. I have always been very interested in public humanities, and I would one day like to work at a museum or another institute that helps to bring academic knowledge to the general public, and video games are a compelling option to bridge that gap!

You just translated Excavate Egypt to Dutch.  Tell us why that was important to you.

Most children growing up in Flanders or the Netherlands don’t speak or read English until they are in high school. So, I wanted to make sure that they can have access to this archaeological video game in their native language. I often get the question from children what archaeologists do and what an excavation looks like. I think this game perfectly explains it to them, while being fun at the same time!
I love how the Dig-It Excavate! games approach history through a different medium: instead of reading about ancient cultures, or hearing about them from a teacher or parent, children actually get to explore the worlds themselves. They see the objects, they hear the sounds, they can visualize the cities. It really speaks to children who are visual learners and are often not connecting with the traditional educational system.

What other games would you recommend for learning history and/or archaeology?

I have been a big fan of the Assassin’s Creed series. Especially the last two games, Origins set in ancient Egypt, and Odyssey, set in ancient Greece, are so well done that they are a must-play for anyone interested in the ancient world. The game producers actually worked together with historians and archaeologists to make the gaming environment as authentic as possible. They also feature something called “Discovery Tours”, which are short, guided tours that take you around the ancient world and give you more information on the buildings or objects you are seeing. It’s truly the closest you can get to traveling back in time and walking around the cities yourself! (https://assassinscreed.ubisoft.com/game/en-us/home)

My other recommendation is Heaven’s Vault: an archaeology game actually about archaeology! In the game, you play an archaeologist who peruses artifacts to decipher an ancient hieroglyphic language. You walk around ruins, collects clues, and slowly uncover the forgotten language of a lost civilizations. It’s a lot of fun! (https://www.inklestudios.com/heavensvault/)

Those sound like some amazing adventures and learning experiences! It’s always exciting to see another join the battle of combining games and education. We can’t thank Tine enough for helping us expand our love of archaeology to more students!
Educational games and materials should be available to everyone, especially in this era where so much schooling is happening at home. Make sure to check out our website for the rotating cycle of free games and teaching material!

If you’re a big fan of our Excavate! Series and are interested in converting the content into your native language, contact our Dig-iT! team! We are always excited to expand our reach into different communities!

As part of our commitment to promoting social studies education in classrooms around the world we have made our video game Excavate! Egypt free for everyone.  It is our goal to crowd source translate this interactive lesson plan on Ancient Egyptian history through the lens of Archaeology in as many languages as possible. If you are an archaeologist or world history teacher that speaks a native language we are always looking to add new languages.