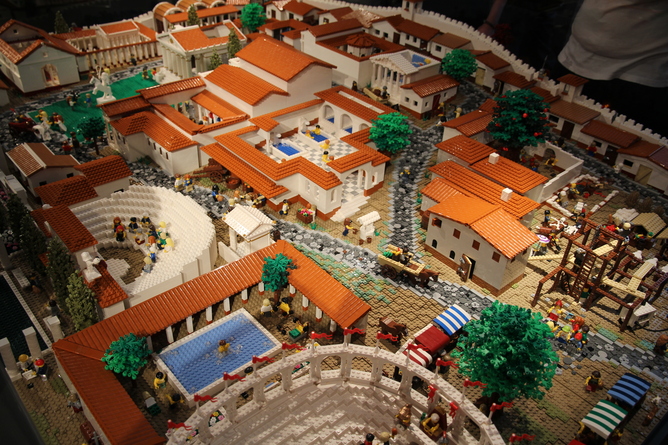 It took professional Lego artist extraordinaire Ryan McNaught 470 hours—that’s less than three weeks—to build his rendition of the ancient Roman city of Pompeii. It took developers and artists at Dig-It! Games eight months to build the ruins of Pompeii for one of our newest interactive games, Loot Pursuit: Pompeii™. Pompeii will also be the jumping off point for Team Q’s newest adventure in Roman Town™ (coming soon to an iPad near you!).

McNaught mixed historical and modern elements in his representation of Pompeii. The model depicts Pompeii as it would have been found right before its destruction by Mount Vesuvius in 79 AD, how it looked when the city was rediscovered in the 1700s, and finally, how it looks today. 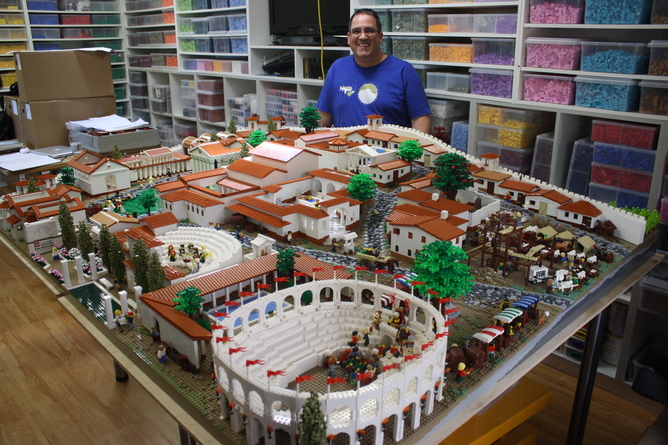 The process of building a city with 190,000 individual Lego blocks and building its ruins using 3D art development software are similar, but game production involves not only the building of the art within the game, but also programming, coding, and other elements.

A lot of work goes into making a game. From initial design to the game’s release, the team at Dig-It! Games™ hunkers down and gets busy. There’s the game’s conception and its design, the research, the programming, art, sound and—very important—testing.

Artists at Dig-It! Games™ researched the city, much like McNaught must have done, through archaeology books and the internet. One of the coolest tools used is Google Earth. Google Earth allows visitors to pinpoint anywhere on Earth by viewing satellite imagery, maps, terrain, and 3D buildings. In fact, when looking at a street view within Loot Pursuit: Pompeii™, the art team at Dig-It! Games™ can find that exact spot within a recent image of Google Earth. The tourists in the game are even based on those who were visiting the site when Google took their picture.

The objective is to make things look real to our players. Can they imagine themselves within the ruins of Pompeii, helping to rescue stolen artifacts and perhaps catch the notorious looter, Ladrone?

Much of the 3D art within the game begins with a ball. It can be stretched, manipulated and molded to create the artifacts hidden throughout the site of Pompeii. These artifacts come from years of archaeological discovery and research. But while players have a goal in mind to collect all the artifacts and win the game—they’ve got to solve timed math problems to do it.

Craig Barker, education manager at Sydney University Museums where the Pompeii structure is on display, has been quoted as saying, “Education and entertainment need not be mutually exclusive in a museum.”

Well, that’s certainly true about museums, but it also plays right back into our mission. We believe that fun and learning can be blended seamlessly into an interactive and engaging learning experience for kids.

That’s why our games incorporate age-appropriate content in math, science, social studies, and language arts with mini-games and challenges that encourage our players to think critically and outside the box.