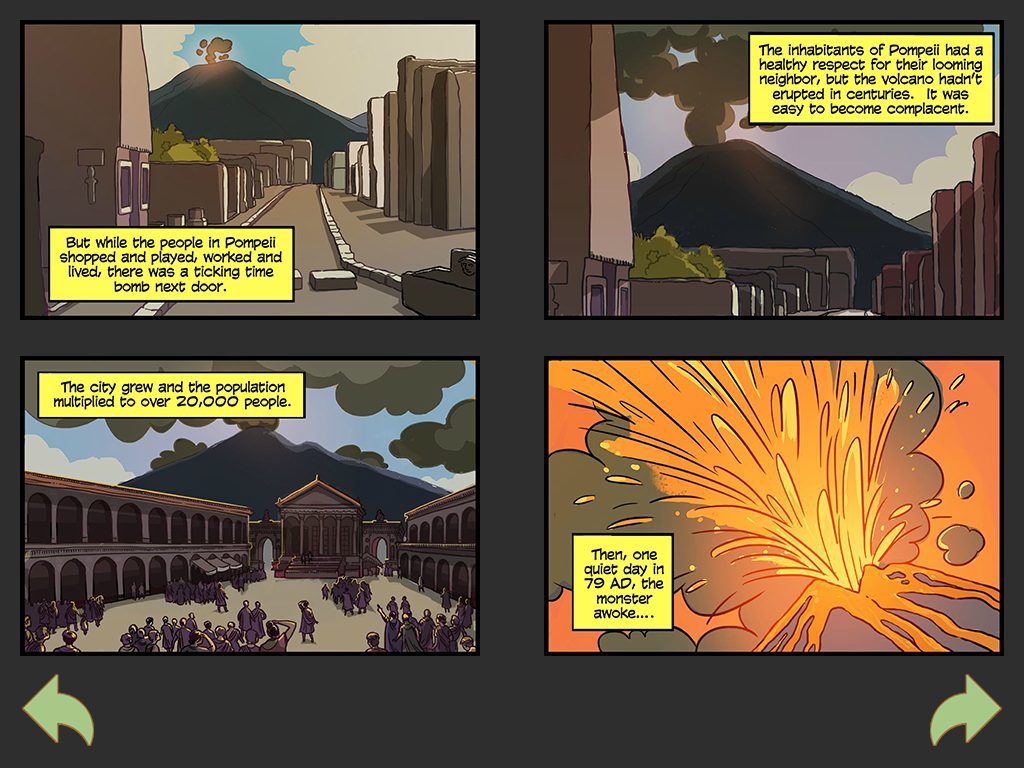 In 79 A.D., the ancient Roman city of Pompeii was smothered by the suffocating volcanic ash of Mount Vesuvius. Until a few years ago, it was widely assumed that the people of Pompeii—coated in ash and frozen into lifelike poses—met their death by breathing in the ash that encased the city. Now recent studies have shown that the heat from the eruption of the still-active Mount Vesuvius caused people to be instantly shocked, buried by ash and dust, into the emotive poses we see today.

Pompeii offers archeologists an opportunity to see what life may have been like for the people in this ancient Roman town. It also offers us the chance to understand what the people of Pompeii may have been feeling in their last moments. Scientists have been able to uncover parents cradling their children from the blast, adults clutching prized possessions.

It is these scenes that have caused the general public to be so fascinated by the ruins of Pompeii.

Inspired by the imagery of town “frozen-in-time,” Dan Smith, singer-songwriter for the band Bastille,
wrote the recent hit “Pompeii.” In an interview with Alternative Addiction, Smith said, “I was reading a bit about what happened when Vesuvius erupted and wiped out Pompeii…The pictures of reconstructed bodies in the position that they died, that stays with you. It’s just such a potent image. I was thinking about that. I imagined a conversation between two of these sort of charred bodies and the conversation they would have reflecting on the city and other things. The song really came from that.”

Pompeii similarly inspired filmmaker Paul W.S. Anderson to produce a film of the same name, released in February of this year. In an interview with Filmmaker Magazine, Anderson said, “The thing about Pompeii is you’re not free to do whatever you want. The interesting thing about Pompeii is that, of any archaeological site, it’s the best preserved because it was buried in the ash. In the Pompeii exhibits there’s a touring walk. You see loaves of bread that are kind of perfectly preserved. You see the bodies, you see how people lived, you see how they died. The frescoes and wall paintings in Pompeii are amazing and a lot of our production design was based on exactly that.” In the film, Anderson felt he had a responsibility to portray the city of Pompeii, the disaster and tragedy that struck the city, as accurately as possible.

Archeologists are also fascinated by the site of Pompeii. Our founder Suzi Wilczynski traveled extensively in the Mediterranean area as an archeologist prior to becoming a middle school teacher and ultimately founding Dig-It! Games™ to meet the learning needs of middle school students. In an interview with TDMonthly, she said, “Kids should know about ancient Rome for the reason we teach history in general- we need to be able to understand our past to understand our future. It’s important for American students especially, and European students to an extent, because ancient Rome is where our culture comes from- their art, education, food, government, all have influenced everything in our lives.”

Our newest app reflects Dig-It! Games™ dedication to providing accurate, engaging games to children that encourage them to explore cultures and develop a love of learning. Loot Pursuit: Pompeii™ sets out to turn math drills into an interactive adventure, in which students recover stolen artifacts hidden in locked boxes around the archeological site. Players must solve challenging math problems aligned to the Common Core for 6th and 7th grade standards, including algebra, ratios and proportions, fractions, integers, and geometry, to unlock the boxes and discover ancient Roman culture. There are more than 75 artifacts hidden throughout 5 various archeological sites within Pompeii. The story-based game follows Team Q—the mystery-solving crew from the award-winning Mayan Mysteries™—as they chase a notorious thief.

Join the adventure and see the mystery of Pompeii for yourself.