Tuesday, April 21st is the 2,768th anniversary of the founding of Rome! We’re celebrating with the release of our newest game, Roman Town™. Latin teacher and archaeologist Kate Sheeler sets the stage for this exciting event with this fun blog post about a love of all things Roman. Read on to find out how Kate fell in love with Latin and Roman history and why she’s excited about the Roman Town launch.

I am in a seriously committed relationship with Latin and Roman History that started as a crush in the 5th grade. I met Latin through reading Roman and Greek mythology (I still own my very first copy of Edith Hamiliton’s Mythology), and, when given the opportunity to study Latin in 7th grade seized upon it.

In fact, my middle school Latin teacher, Maureen O’Donnell, trained us to compete in local Virginia Junior Classical League (VJCL) certamen tournaments (I was the team member responsible for knowing every state motto, all Latin phrases, and a collection of very random facts about Roman culture and civilization). In addition to certamen, I was fascinated by Latin grammar and competed at state and national Junior Classical League conventions in that subject area. I took the National Latin Exam (NLE) the first year it was offered and fell in love. Latin has been my “significant other” since I was 11. That makes it a 40 year relationship.

In 1988 I began working as an archaeologist at the site of Caesarea Maritima, combining my love of Latin and Roman History with classical archaeology. Working at Caesarea allowed me to explore various aspects of Roman history, culture and civilization: trade routes, politics in the provinces, water systems/engineering, art/architecture, and city planning. I saw first-hand the gleaming white columns Josephus mentions in his description of Herod’s capital city. Over the years, I have also excavated in Italy and Greece, though most of my summers have been spent in Israel, exploring the Romans in the Ancient Near East.

I started teaching in September 1990 and am currently celebrating my 25th year in the classroom. I teach at the National Cathedral School in Washington, DC, the same place where Suzi Wilczynski, the founder of Dig-It! Games™, went to school. Though I never taught Suzi, I met her while she was in college, studying archaeology. During a semester away from Dartmouth, Suzi worked with me, developing projects and designing lessons on Roman history and archaeology for my Latin students. Our friendship led from the classroom to the field where Suzi and I excavated together at sites in Israel and Greece. We both love all things D.I.R.T. – Digging In Roman Towns. 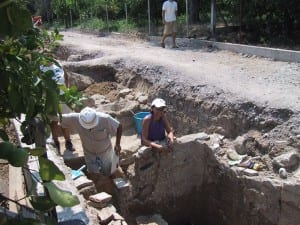 It’s no wonder we’re both excited to celebrate April 21st, the legendary birthday of Rome: Suzi with a great new game on Roman history (click here for a sneak peek of Roman Town!) and me with my students. In my classroom, we will be celebrating this auspicious day by wearing togas, and retelling the story of Romulus and Remus: the ancestors of everything Roman. Abandoned at birth, the twin brothers were nurtured by a she wolf until a kindly farmer found them. The farmer and his wife raised the boys, always telling them that they were destined for greatness. In time, the boys reclaimed their birthright: they were the sons of Mars, the god of war, and the rightful heirs of a small kingdom. The boys returned “home” and fought each other for the right to be King. Romulus won this fight and named his kingdom Rome.

The best way to make the Romans come alive for my students is to share my experiences from the field. The children I teach come to understand that I, too, am a student. My fieldwork and research in the summer complements my teaching in the classroom. The Ecce Romani textbook series we use focuses on a family living in Rome in 80 CE. Mt Vesuvius has erupted, destroying Pompeii and leaving one of the chief characters motherless. The Emperor Vespasian is building the Flavian Amphitheater with slaves captured during the Jewish Revolts in the province of Judaea. Having traveled to Pompeii and Herculaneum, and having worked at Caesarea Maritima (part of ancient Judea), I can not only put my students’ studies into historical context, but I can also share with them what it is like to walk the streets of an ancient Roman city and examine the material culture left behind by Romans of every social class.

Pottery sherds, a portion of a mosaic floor, murex shells (murex snails are used to make “royal purple” dye), and pieces of ancient glass from my fieldwork bring Latin out of the textbook and into the hands of my students. Games like “Roman Town” enhance what I do in class, allowing my students to travel back in time. Students can experience the history of a place while playing the game. They are immersed in ancient culture, exposed to important facts and given a hands-on opportunity to “be” Roman. This sort of game based learning offers students the chance to explore, while strengthening critical thinking skills. The Romans become real, history becomes an adventure, and my students get to start their own meaningful relationship with Latin and Roman History. 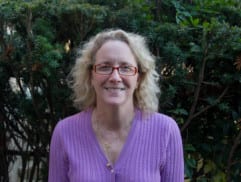 Kate Sheeler earned a BA in Latin from the College of William and Mary and a MAT in Latin from the University of Virginia. During the academic year, she teaches middle school and high school at the National Cathedral School in Washington DC, where she has taught Latin for the past 24 years. Kate combines her passion for teaching Latin with her interests in archaeology, spending her summers working on various archaeological excavations. Kate’s experiences have inspired her former students to join her in the field, as well as to pursue Classical Studies in college. Since 1988, Kate has worked at various sites in Israel, Italy, and Greece. Currently she is a senior staff member with Hesi Regional Project in the northern Negev in Israel.