Steve Hunnicutt is Dig-It! Games’ Head Developer responsible for bringing the coding to life. Steve’s father was in the Navy, so he grew up in lots of different places, including Honolulu, Hawaii for three years. After his father retired from the Navy, we moved to Jacksonville, Florida. He spent more of my childhood there than anywhere else, so he considers it his hometown. Steve moved to Baltimore in 1990 and has been living there ever since.

Steve sat down for a Q&A to give us more insight into his role at Dig-It! Games, what sparked his love of programming and how aspiring programmers can get started. 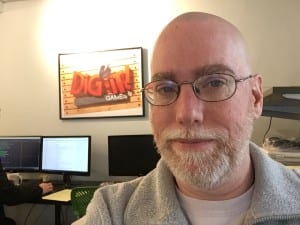 What’s an average day at Dig-It! Games look like for you?
I don’t really have an “average” day. One day, we’re working out the design for a new game and doing prototypes. The next day, we may start working on the code architecture. Sometimes, I do concept sketches to communicate ideas to the rest of the team. It’s always something different.

What got you interested in game design?
I love playing games. Board games are favorites, but I’m always playing some sort of video game. Also, I’ve been coding in one language or another for almost thirty years. So when I had the opportunity to work at a game studio, I grabbed it.

Any advice for kids who want to become programmers?
It’s easier than ever to dip your toe into programming. There are lots of different ways to get started. One of the easiest is to start building web pages; all you need is a text editor and a web browser. There are innumerable tutorials to get you started. Once you have a simple page, you can add interactivity with JavaScript. You can make a lot of simple games very easily, but the platform has the potential for very complex games. The only limit is your imagination and your skill.

What is your favorite video or digital game from childhood?
My family purchased an Apple //e computer about the time I was starting the eighth grade. I took to it immediately, playing games, connecting to bulletin board systems (BBS) and writing my own programs. My favorite game was one that I played with my mother. It was called Starlanes.

The goal of Starlanes was to build the most profitable interstellar company. Each player would place a star base each turn. Adjacent star bases connected into a single company. Companies that were adjacent to a star were more profitable. In addition, each turn the player could buy stock in any of the companies, even your opponent’s. If two companies touched, they merged and you could get a big stock payoff.

Once upon a time, I had the source code to Starlanes. I still hope that someday I’ll find it again and I could bring it back to life on modern computers.

If you were ruler of your own country what would be the first law you would introduce?
This is a tough question. I think I would institute a social welfare system that guaranteed basic income, healthcare, and nutrition to my citizens. Read Ernest Callenbach’s “Ecotopia” for a much more detailed vision of a society that I find compelling.