We released the original Roman Town™ five years ago to critical acclaim from both educators and parents. That may not seem too long ago, but its technology fit for its time—still in a CD-ROM format, parents and educators were able to load Roman Town onto a computer for students, and they loved it.

Technology has changed more than we ever thought possible in just those five years. The students we now seek to serve – Middle Schoolers – were just starting on their educational journey. This generation of students has grown up with smartphones and tablets at their fingertips. Now, the tool many educators are using in the classroom is the iPad. For us at Dig-It! Games™ , that meant a complete redesign of the original Roman Town in order for it to become a modern, kid-friendly app for this tech-savvy group of students.

It takes months of planning to develop a digital learning app and to really get it right. The very first thing to consider is what an app hopes to accomplish. Will it be aligned to educational standards? What will the student walk away knowing? With the new Roman Town, the game aims to engage students in an ancient Roman culture. The goal is for students to immerse themselves in the world of the archaeological site of Pompeii.

One of the most impactful ways to do that is through art—it has to be realistic. Mikel “Menty” Wellington joined the Dig-It! Games team in October 2013. Since then, Menty has been focused on developing concepts, characters, and worlds that illustrate real life to spark excitement about education.

Consider this—when you are searching for an app via the App Store, the first thing you see is the logo, so we knew we wanted it to make an impression. Below you’ll see Menty’s original ideas, which stemmed from the very first Roman Town logo, to create what we called the “Roman Town 2.0” logo. 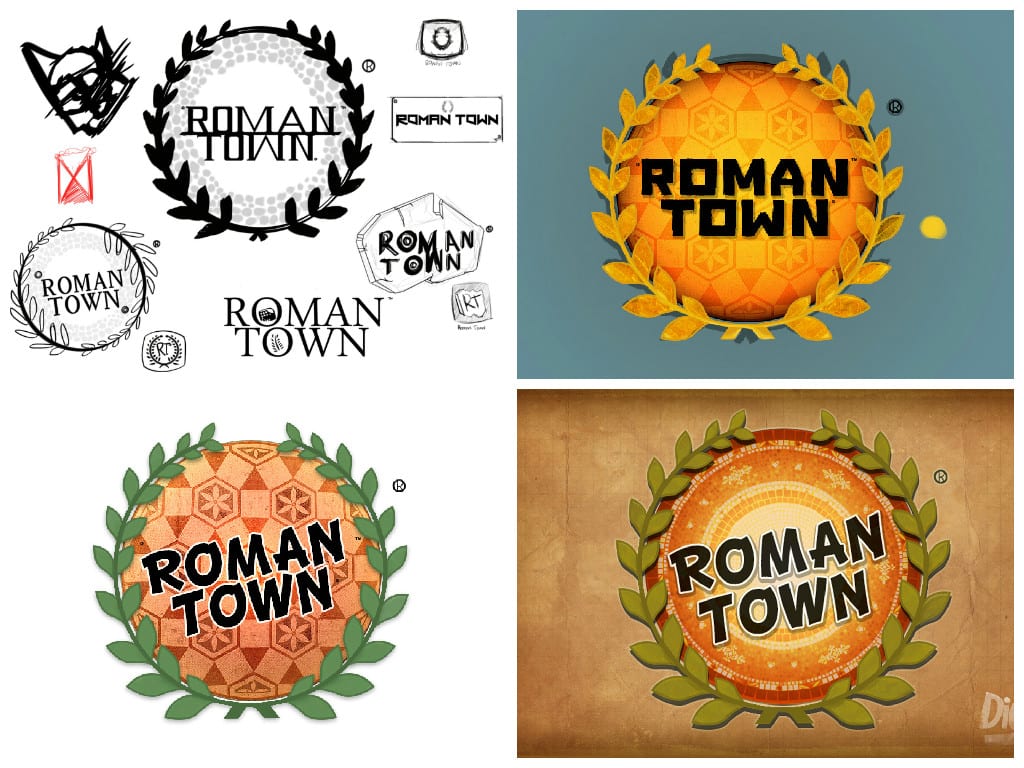 Another important aspect of the game is the artifacts within Roman Town. Dig-It! Games is committed to complete authenticity in the factual details of its games, so we make the artifacts utterly realistic—not only should they apply to Roman culture, but they should be authentic to the site of Pompeii. Players should know that the artifacts are items they would see in a museum or discover on an excavation site. The objects should seem touchable, as if the player can pick them up. To do this, Menty begins with an image—a photo of a real artifact. In the mini-game Jigsaw, for example, players are asked to put together a puzzle of a mosaic. Menty had to start by considering the puzzle itself—how it would be shaped, how many pieces there would be—before he could begin additional artwork. This not only included the puzzle itself, but the table that it’s sitting on, and the other items on that table. All of these pieces come together to create an authentic experience for the player. 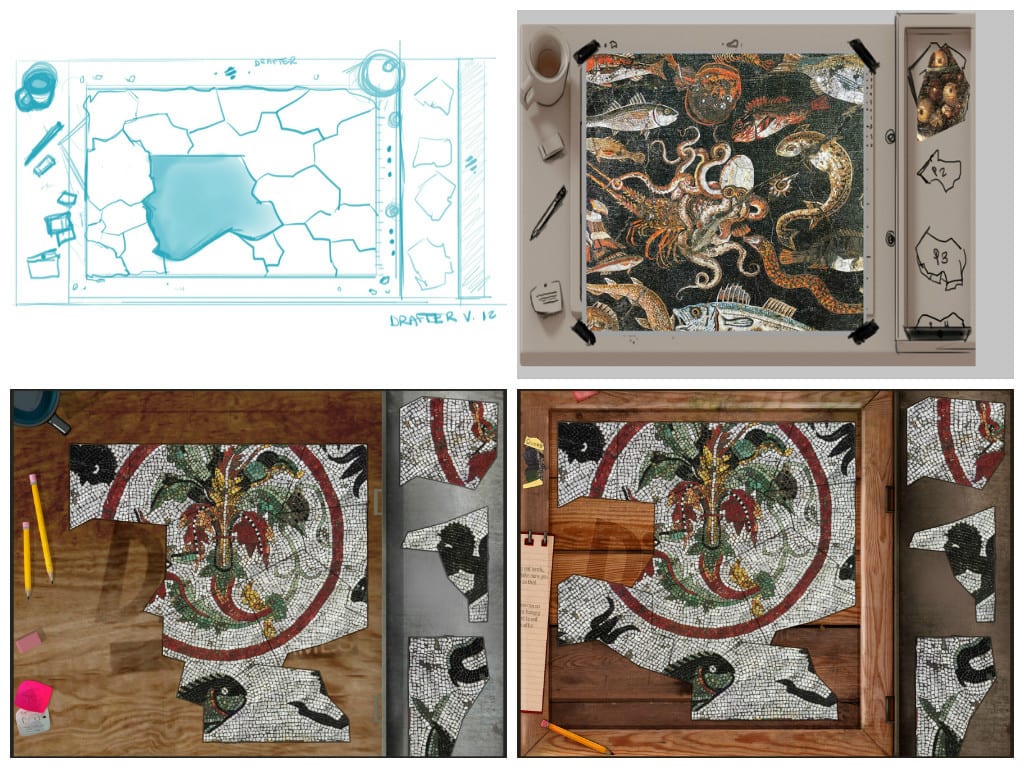 Have you ever played Cypher? Your opponent picks a 4-digit number, and you have to guess what it is. Based on your response, your opponent can tell you that a digit is in the right place, in the wrong place and should move, or does not belong to the number. You only have a certain amount of tries to beat your opponent. You can see the progression from Menty’s original sketch to the addition of more complicated buttons in the final product. 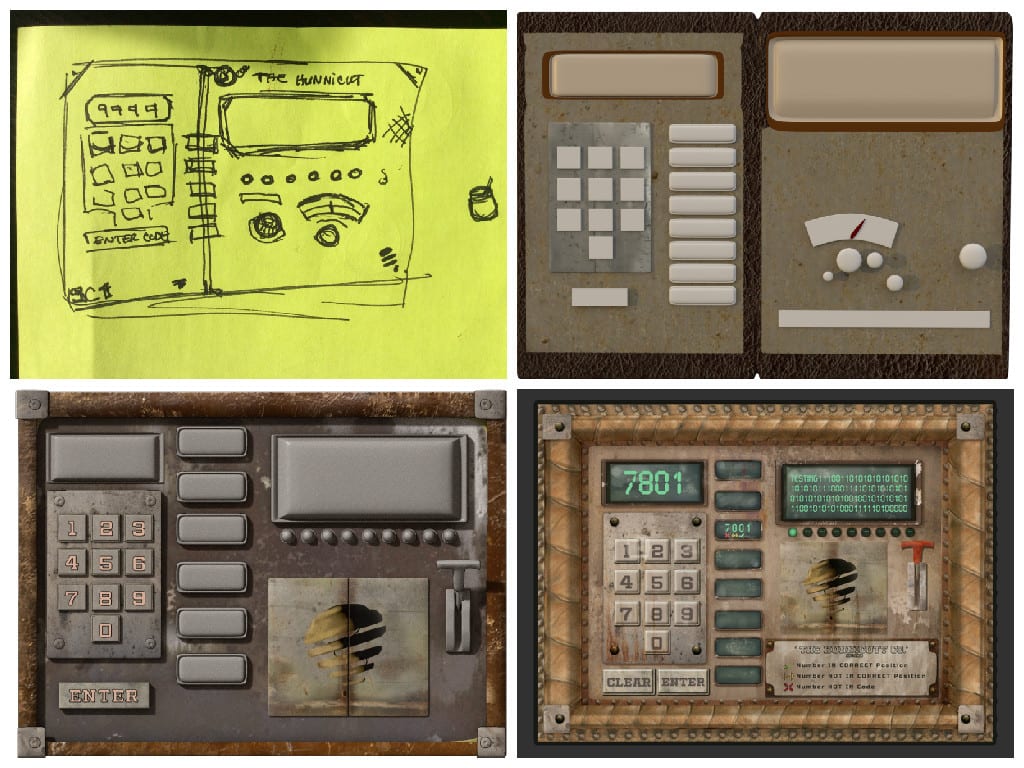 Players sometimes take their experience within a game for granted. They’re often focused on the finish line and forget to appreciate the graphics—but that’s the point. If the experience didn’t seem real, they would focus on the little things instead of having fun while learning. Because of artists like Menty and his team, players can concentrate on the content and immerse themselves in the world of Roman Town (Coming Soon!)