Archaeologist, Social Studies teacher and video game designer – Suzi Wilczynski has done it all. With an arsenal of learning games, from the FableVision Studios-developed Mayan Mysteries™ to the soon-to-be launched Roman Town™, Suzi’s studio Dig-It! Games™ has a plethora of digital learning resources for students. FableVision recently talked with Suzi about Digital Learning Day and the important role games play in the classroom. 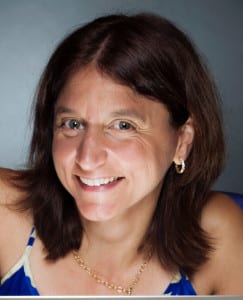 What is Digital Learning Day and why is it important?

Digital Learning Day is a wonderful concept that the Alliance for Excellent Education brought to life back in 2012. It’s a day dedicated to celebrating innovative teaching practices nationwide that leverage instructional technology programs to improve student outcomes. Since it launched as a grassroots campaign, it has truly grown into a national celebration that is driving awareness and recognition of how technology enhances the learning experience in K-12 schools. I think the Alliance says it best when referring to Digital Learning Day as “not about technology, [but] about learning.”

Can you share a bit about the history of Dig-It! Games?

In 2005, I began my quest to create fun, interactive learning experiences for middle school students. As an educator and trained archaeologist, I had used archaeology to bring history to life while calling upon a wide range of skills, including math, science, and language arts. To make these subjects relevant to 21st century kids, I set out to create entertaining, interactive digital games that could be played at school or at home. My goal was to use games to engage children in an immersive way that goes beyond what they can experience from a textbook, film, or lecture. After learning everything I could about game design and playing more games than I care to admit, I released Roman Town™ in January 2010 to critical acclaim from parents, educators, and the education industry. In 2012, Dig-It! Games™ partnered with FableVision Studios to produce Mayan Mysteries™, an award-winning puzzle-based adventure game about the ancient Maya. 2013 was all about math at Dig-It! Games™, with the releases of math-based games Loot Pursuit: Tulum™, MayaNumbers™, and Can U Dig It!™ In 2014, we released a continuation of the Mayan Mysteries™ story, a sequel to the Loot Pursuit™ series in Pompeii, and mini-games, including Artifact Snatch™ and Maya Quiz™. We’re so excited for what 2015 has in store. We just released our redesigned app for Roman Town™ and are looking forward to adding to our catalog of fun learning games for middle schoolers! 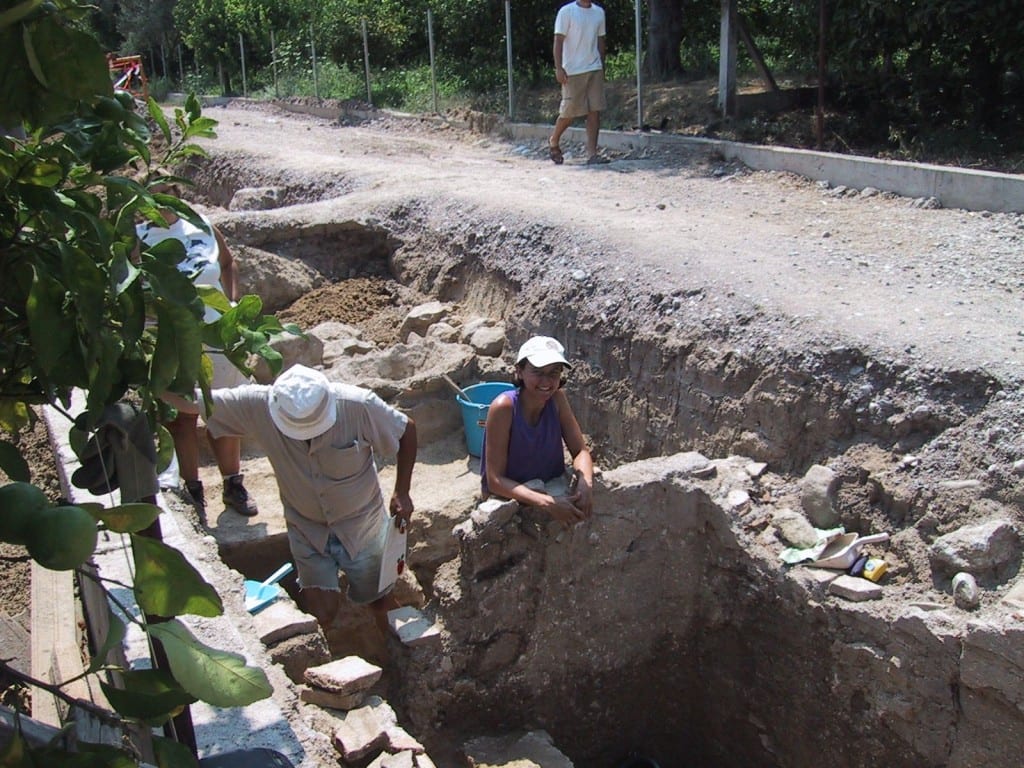 You have a wealth of background experience to pull from in the work you do now. We hear you like to play in the dirt. What was your experience as an archaeologist like?

One of the things I liked most about fieldwork was the opportunity to be in another country for an extended period of time. I loved getting the chance to actually experience the culture in a way you really can’t when you’re just visiting for a few days. I do have to admit though, I liked the dirt a lot too! I’m one of those weird people that actually likes studying dirt layers. Finding cool artifacts is fun, of course, but it’s the dirt that really tells the story. Archaeology is all about every day life—artifacts tell us what people ate, what they wore, and how they spent their time. But it’s the dirt that tells us when and how people used those things. Archaeology is pretty hard work—all that dirt is HEAVY!—but it was all worth it to see first hand how people lived in the past.

How did your past experience as a social studies teacher help you in the transition to game designer?

It does seem like teacher and game designer are really different, doesn’t it? Surprisingly, they’re not. A big part of games, especially the kind we make, is teaching something. Even games that aren’t strictly for learning have to teach players how to operate in their world. The fancy word for it is “user interface,” but really, it’s not so different from planning lessons that will engage your students. The goal with both is to communicate information quickly and easily in a form that resonates with your audience. Then you have to figure out how to seamlessly build on that knowledge through the course of a game, kind of like planning a class. Levels are very comparable to units in that knowledge of a specific feature set builds slowly through the level and completing the level shows mastery the way an end of unit test does. Even grading has a place in game design: when you really think about it, grading a test and scoring a level are virtually the same thing—they communicate the level of mastery for the content. Good games, like good lessons, require deep understanding not only of the game content but how the user will respond to it. In that, game designers do have an advantage over teachers. Feedback in games is immediate and leveling up requires full mastery of the content. That allows game designers to communicate directly with the player and know instantly when a feature does its job successfully.

Do you have any advice for teachers looking to implement more digital games in the classroom?

Teachers have always known that games add depth to lessons by engaging students’ imaginations and allowing them to find answers on their own and in their own way. Games on mobile devices, computers, and interactive whiteboards combine graphics, audio, and movement into a coherent whole. These games are interactive and immersive, forcing the player to be truly invested in the outcome. Players are encouraged to strengthen weaker skills while simultaneously taking advantage of their proficiencies. For teachers looking to add digital games in the classroom, there are a few common denominators found in successful interactive learning games, such as being authentic and skills-based. Teachers should consider how different games can be woven into the curriculum based on content. For example, reinforcement games can be played just after students have begun to master new skills. Most importantly—teachers should show their students that they’re excited about adding games into the classroom; when teachers are excited, students are too. Just like playing digital games, enjoy blending fun and learning in the classroom with the addition of these tools to your curriculum!

FableVision Studios partnered with Dig-It! Games™ to create multiple games, including the award-winning Mayan Mysteries™. Tell us a bit about the game and how it applies to digital-game-based learning?

Mayan Mysteries™ is an exciting educational adventure that turns middle school students into real archaeologists as they explore the mysterious world of the ancient Maya and learn about their remarkable civilization. In the one-of-a-kind puzzle-based online game, players embark on a thrilling expedition with “Team Q” to catch a secretive thief. Play involves visiting excavation sites, identifying and carving dates into the Maya calendar, using real archaeological tools such as trowels, picks, and brushes to uncover authentic artifacts, finding hidden objects, creating maps, using the Maya number system, and more. Mayan Mysteries™ is true game-based learning: it is standards-based, cross-curricular, purpose-aligned, interactive, age-appropriate, and fun. It can be played at home or at school, and is ideal for interactive learning in the classroom. Its authentic content, contributed by a world-renowned Maya expert, aligns to multiple National Standards, including: National Curriculum Standards for Social Studies and Common Core Standards for Language Arts and Mathematics. Players are immersed in a long-term gaming experience that sparks imagination, excites young minds, and teaches new ideas. It motivates and encourages independent and critical thinking for all learning styles, which are critical components of digital-game-based learning. I’m very proud that Mayan Mysteries™ has consistently ranked among the top downloads on iTunes. Players around the world are downloading the game that engages kids and brings history to life.

Dig-It! Games™ produced their first game, Roman Town™, five years ago. Now you’re releasing an updated Roman Town™ for the iPad. What can you tell us about the game and how it’s changed?

We are very excited to celebrate the five-year anniversary of Roman Town™ with a brand new version of the interactive game. The original Roman Town™ was created in a CD-ROM format, which met the needs of students and teachers when it launched back in 2010. What kids want and need from educational games has changed dramatically since we first introduced Roman Town™ almost five years ago. Today, Roman Town™ is an intuitive social studies-based problem-solving app for the iPad. The game engages and inspires students as it teaches them about the ancient civilization through interactions with characters, exploration of the ruins, and artifacts woven into its mini-games. Players explore Pompeii, play ancient games, and help Charlie and Fiona (the popular characters from Dig-It! Games™’ series of top-rated games) find clues to track down the infamous Ladrone. The new Roman Town™ includes even more challenging puzzles to exercise strategic thinking, spatial reasoning, memory, logic, and math skills, among others. The factual information about Roman life has been expanded and new graphics create a truly immersive experience. Most importantly, today’s Roman Town™ is even more fun than the original!

Suzi Wilczynski launched Dig-It! Games™ in 2005. Wilczynski is a trained archaeologist with nearly 10 years of dig experience, including projects in Greece and Israel. Formerly a middle-school teacher, Wilczynski noticed a lack of classroom options for teaching students about the fundamentals and importance of archaeology. She developed a continuously expanding suite of learning games including Mayan Mysteries™ and Roman Town™ to give classroom instructors and parents fun, interactive tools to help students learn about the ancient civilizations through archaeology.

Fun – When kids and adults play our games, they can’t help but be entertained!

Educational – Our games incorporate age-appropriate content in math, science, social studies, and language arts into interactive learning experiences. Authentic and accurate information that conforms to curriculum mandates and Standards of Learning is built into every game we produce.

Engaging – Dig-It! Games™ engages different learning styles and allow learners to proceed at their own pace and explore topics that are meaningful to them.

Cultural – Our games are tools that allow kids to explore cultures, expand their knowledge, and discover a love of learning.

Inspirational – Through our seamless blend of fun and learning, we seek to foster the joy of intellectual discovery and inspire kids to think differently about learning.